You are here: Home / Articles / ALL ARTICLES / Differences Between the Rapture and the Second Coming

Differences Between the Rapture and the Second Coming

by Thomas Ice
Over the years I have had hundreds of discussions with many people about the timing of the rapture. Of course, I strongly believe that the New Testament indicates that the Church will be raptured before the tribulation. One of the key reasons I think this is because I believe the Bible teaches that the rapture is a distinct event from Christ's second coming to the earth. In any consideration of the truthfulness of pretribulationism this issue is of crucial importance...
Series:Articles
Print
Text:notes

Differences Between the Rapture and the Second Coming

Over the years I have had hundreds of discussions with many people about the timing of the rapture. Of course, I strongly believe that the New Testament indicates that the Church will be raptured before the tribulation. One of the key reasons I think this is because I believe the Bible teaches that the rapture is a distinct event from Christ's second coming to the earth. In any consideration of the truthfulness of pretribulationism this issue is of crucial importance.

Dr. John Feinberg notes that distinguishing between the rapture and second coming is important in establishing pretribulationism against the non-pre-trib claim that the Bible does not teach such a view.

A key factor in understanding the New Testament’s teaching of the pretribulational rapture revolves around the fact that two future comings of Christ are presented. The first coming is the catching up into the clouds of the church before the seven-year tribulation and the second coming occurs at the end of the tribulation when Christ returns to the earth to begin His 1,000 year kingdom. Anyone desirous of insight into the biblical teaching of the rapture and second advent must study and decide whether Scripture speaks of one or two future events. Yet, many non-pretribulationists never deal with this issue.

Posttribulationists usually contend that if the rapture and the second coming are two distinct events, separated by about seven years, then there ought to be at least one passage in Scripture which clearly teaches this. However, the Bible does not always teach God’s truth in accordance with our preconceived notions or in such a way that answers directly all of our questions. For example, a Unitarian could design a similar kind of question regarding the Trinity. "Where is at least one passage in Scripture which clearly says that the Persons of the Godhead are distinct?" We who believe the Trinity reply that the Bible teaches the Trinity but in a different way.

Many important biblical doctrines are not given to us directly from a single verse, we often need to harmonize passages into systematic conclusions. Some truths are directly stated in the Bible, such as the deity of Christ (John 1:1, Titus 2:13). But doctrines like the Trinity and the incarnate nature of Christ are the product of biblical harmonization. Taking into account all biblical texts, orthodox theologians, over time, recognized that God is a Trinity and that Christ is the God-Man. Similarly, a systematic consideration of all biblical passages reveals that Scripture teaches two future comings. I am not saying that the Bible does not teach a pre-trib rapture, as some have misconstrued similar comments in the past. The New Testament does teach pretribulationism, even though it may not be presented in a way that is not as clear to some as they might like.

Posttribulationists often contend that the pre-trib position is built merely built upon an assumption that certain verses ’make sense’if and only if the pre-trib model of the rapture is assumed to be correct. However, they often fail to make it clear to their readers that they are just as dependent upon assumptions as they say pre-tribers are. Their error stems from failure to observe actual biblical distinctions.

For example, Christ’s overall ministry has two phases which revolve around His two comings. Phase one took place at Christ’s first coming when He came in humiliation to suffer. Phase two will begin at Christ’s second coming when He will reign on earth in power and glory. Failure to distinguish these two phases was a key factor in Israel’s rejection of Jesus as Messiah at His first coming. In the same way, failure to see clear distinctions between the rapture and second advent lead many to a misinterpretation of God’s future plan.

The Nature of the Rapture

The rapture is most clearly presented in 1 Thessalonians 4:13-18. In verse 17 the English phrase "caught up" translates the Greek word "harpázô," which means "to seize upon with force" or "to snatch up." Latin translators of the Bible used the word "rapere," the root of the English term "rapture." At the rapture living believers will be "caught up" in the air, translated into the clouds, in a moment of time.

The rapture (or "translation" ) of the church is often paralleled to the "raptures" of Enoch (Genesis 5:24) and Elijah (2 Kings 2: 12). In each case, the individual disappeared or was caught up into-heaven. At His ascension, our Lord Himself was "taken up" into heaven (Acts 1:9). The biblical description of the rapture involves both the resurrection of deceased believers and the translation of living believers into the air to meet the Lord (1 Thess. 4:16-17; 1 Cor. 15:51 52).[2]

Differences between the two events are harmonized naturally by the pre-trib position, while other views are not able to account naturally from the biblical text for such distinctions. The following graphic lists a compilation of rapture passages set opposite to many that refer to the second coming. 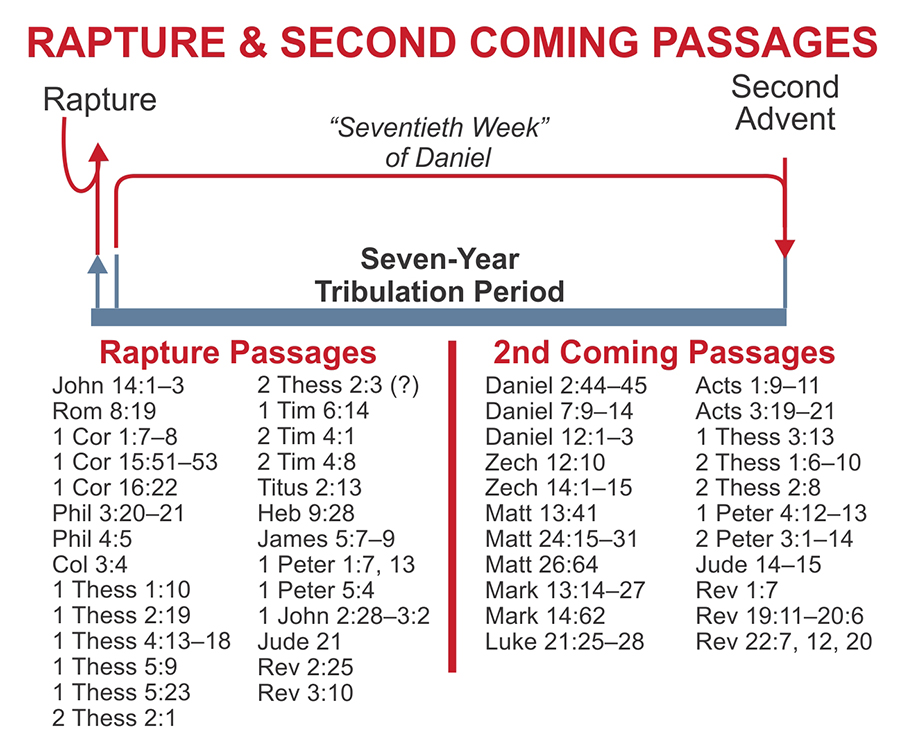 Based upon the references above, we can see a vast difference between the character of passages referring to the rapture when compared to those of the second coming as summarized in the following differences:

John Walvoord concludes that these "contrasts should make it evident that the translation of the church is an event quite different in character and time from the return of the Lord to establish His kingdom, and confirms the conclusion that the translation takes place before the tribulation."[3]

The movement for the believer at the rapture is from earth to heaven, while it is from heaven to earth at the second advent. At the rapture, the Lord comes for his saints (1 Thess. 4:16), while at the second coming the Lord comes with His saints (1 Thess. 3:13). At the rapture, the Lord comes only for believers, but His return to the earth will impact all people. The rapture is a translation/resurrection event where the Lord takes believers "to the Father’s house" in heaven (John 14:3), while at the second coming believers return from heaven to the earth (Matt. 24:30). Hindson says, "The different aspects of our Lord’s return are clearly delineated in the scriptures themselves. The only real issue in the eschatological debate is the time interval between them."[4]

One of the strengths of the pre-trib position is that it is best able to harmonize the many events of end-time prophecy because of its distinction between the rapture and the second coming. Normally, posttribulationists do not even attempt to answers such objections and the few that try struggle with the biblical text putting forth stained interpretations. Yet, pretribulationists do not encounter difficulties in providing answers. What are some post-trib problems?

First, posttribulationism requires that the church will be present during the 70th week of Daniel (Dan. 9:24-27) even though it was absent from the first 69. This is in spite of the fact that Daniel 9:24 says that all 70 weeks are for Israel. Pretribulationism is not in conflict with this passage, as is posttribulationism, since the church departs before the beginning of the seven-year period.

Third, premillennial posttribulationism has no answer to their problem of who will populate the millennium if the rapture and second coming occur at the same time. Since all believers will be translated at the rapture and all unbelievers judged, because no unrighteous shall be allowed to enter Christ’s kingdom, then no one would be left in mortal bodies to start the population base for the millennium. The pre-trib viewpoint does not have a problem at this point.

Fourth, posttribulationism is not able to explain the sheep and goats judgment after the second coming in Matthew 25:31-46. As in the previous problem, how would there be any believers in mortal bodies, if they were raptured at the second coming, who would be available to enter into Christ’s kingdom? Pretribulationism does not have such a problem.

Fifth, since Revelation 19:7-8 indicates that the church, Christ’s Bride, is made ready to accompany Christ to earth (Rev. 19:14) before the second coming, how could this reasonably happen if part of the church is still on earth awaiting Christ’s Advent? If the rapture of the church takes place at the second coming, then how does the Bride (i.e., the church) also come with Christ at His return? There would not be sufficient time for this to happen within a posttribulational sequence, but the pre-trib position has no such problem.

The distinctions between Christ’s coming in the air to rapture His church are too great to be reduced into a single coming at the end of the tribulation. These biblical distinctions provide a strong basis for the pre-trib rapture teaching. When we consider that the church is promised exemption from Israel tribulation (1 Thess. 1:10; 5:9; Rev. 3:10) and that the 70th week of Daniel (Dan. 9:24-27) is for Israel and not the church, like the previous 69 weeks, then it only follows that the church will be raptured before the tribulation. Such a hope is indeed a "Blessed Hope." Even so, come Lord Jesus! Maranatha!

[1] John S. Feinberg, "Arguing for the Rapture: Who Must Prove What and How" in Thomas Ice and Timothy Demy, editors When The Trumpet Sounds (Eugene, Oregon: Harvest House Publishers, 1995), p. 194.

[3] The quotation and the first six contrasts in the graphic above are taken from John F. Walvoord, The Return of the Lord (Grand Rapids: Zondervan, 1955), 87-88.