You are here: Home / Articles / ALL ARTICLES / Reporting on a Rapture Debate

by Thomas Ice
On Friday, September 25, 2015 I debated Alan Kurschner at the Hope Center in Plano, Texas just north of Dallas. I presented and defended the case for our Blessed Hope, the pre-trib rapture, while Kurschner argued for what he calls the pre-wrath rapture. (Pretribulationism also believes that the Church will be raptured before the wrath of God is revealed.) ...
Series:Tom’s Perpsectives
Print
Text:notes

"Then we who are alive and remain shall be caught up together with them in the clouds to meet the Lord in the air, and thus we shall always be with the Lord."
–1 Thessalonians 4:17

On Friday, September 25, 2015 I debated Alan Kurschner at the Hope Center in Plano, Texas just north of Dallas. I presented and defended the case for our Blessed Hope, the pre-trib rapture, while Kurschner argued for what he calls the pre-wrath rapture. (Pretribulationism also believes that the Church will be raptured before the wrath of God is revealed.) Kurschner’s view is that the day of the Lord is the wrath of God, but it is only the last year or so of the seven-year 70th week of Daniel and not the entire seven-year period as pretribulationists believe. Therefore the Church will have to face the antichrist and pass through much of the tribulation. Frankly, Kurschner’s view is very hard to grasp without the aid of something like a chart to help. Therefore, I have posted a chart of his view as follows: 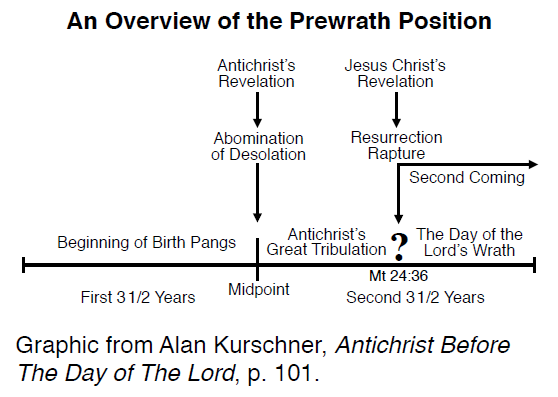 Even with a chart it is still hard to understand and figure out how one could come to such a conclusion.

Robert Van Kampen (1938–1999), one of the richest men in America as a result of his success in business, invented this view of the rapture. According to Renald Showers, who was at his house in Chicago-land, notes the process Van Kampen went through in coming up with this recent view. First Van Kampen rejected pretribulationism and next rejected posttribulationism, resulting in the fact that he had to come up with an alternate view. This is when he developed what he labeled as the pre-wrath rapture view.

Prewrath teaches that the rapture will occur sometime during the second half of the seven-year period. We do not know the exact day or hour (Matt. 24:36). Prewrath makes an important biblical distinction between the events of the Antichrist’s great tribulation and the day of the Lord’s wrath. The Antichrist’s great tribulation will be directed against the church, and at some unknown time, those days will be cut short with the coming of Jesus to resurrect and rapture God’s people. Then God will immediately begin to pour out his day-of-the-Lord wrath against the ungodly.[1]

The debate lasted over three hours. The specific question for the debate was: "The Church will face the antichrist before the Rapture." This is what pre-wrathers believe. Thus, Kurschner took the affirmative and opened with a 25-minute statement affirming that belief. I followed with the negative and provided a 25-minute argument for the pre-trib rapture, which means the Church will not face the antichrist. In his post-debate commentary Kurschner said, "The debate went better than I thought it would. My strategy was to explain the prewrath position clearly and coherently. I believe I accomplished this in my opening remarks as well as my three rebuttal periods."[2] I had four or five people at the debate come up to me when it was over and said they still had no idea exactly what the pre-wrath view is, let alone find it convincing. My oldest son, Daniel, was in town from California and attended the debate. He said it was very hard to even know what the pre-wrath view taught, even with the help of Kurschner’s charts. My middle son, Timothy, listened to an audio version of the debate and even though he has a B.A. and a M.Div. in Bible and theology, he could not figure out exactly what Kurschner taught. After the debate, I had three different individuals come up to me (there were only about 45 people at the debate), who were brought by people who believed in the pre-wrath view and they all said they agreed with the pre-trib position after hearing the debate. It makes one wonder just how clear of a presentation was given for the pre-wrath view. It appears that Kurschner has greatly failed in his stated goal to persuade folks of his views. (You can watch or listen to a recording of the debate at www.pre-trib.org.)

My opening presentation presented biblical arguments for pretribulationism. I began with Christ’s introduction of this new doctrine the night before He was crucified in His "Upper Room Discourse" (John 13–16). Everything Jesus taught during that discourse was brand-new Church Age truth, never revealed in Scripture previously. This includes the promise of the rapture in John 14:1–3. I noted that Paul expanded upon Christ’s introduction of the rapture in 1 Thessalonians 4:13–18 in a thought-for-thought parallel to what Jesus taught in John 14. Paul also called the rapture a mystery, which is a new truth concerning God’s plan for the Church not previously revealed in the Old Testament in 1 Corinthians 15:51–52. The reason this is important is because pre-wrathers equate the rapture of 1 Thessalonians 4 with Christ’s coming in Matthew 24:31. Pretribulationists believe that they are separate events.  The rapture in 1 Thessalonians 4 while Matthew 24:31 is the second coming, which is also taught in the Old Testament (Dan. 7:13; 12:1; Zech. 12:10; 14:4–5). Clearly if the rapture is not the same event as Christ’s Return in Matthew 24:27–31, and it is not, then the pre-wrath view is not possible.

Another big issue that disproves the pre-wrath view is the fact that the entire 70th week of Daniel contains the wrath of God.  Pre-wrathers attempt to chop-up the 70th week into segments as noted in the chart of their view posted above. In spite of their claims to the contrary, there is no biblical basis for their segmenting the 70th week into distinguishable compartments, except for the first and second halves of the tribulation. Yet, even with that division it is clear that God’s wrath occurs in both halves of the tribulation.

An argument I put forward demonstrating that even the first half of the tribulation contains God’s wrath is found in Christ’s initiation of the seal judgments in Revelation 6. In relation to Christ’s unsealing the first four seals, each time He broke the seal one of the four living creature says "with a voice of thunder, ‘Come’" (Rev. 6:1, 3, 5, 7). After each command the judgment commences. The English word "come" translates the present, imperative of the Greek word erchomai. There is no command of "come" after the fifth seal is broken. Instead, the text simply reports the response to God’s previous judgments by the unbelieving world, which is the martyrdom of believers (Rev. 6:9–11). The sixth seal does not have the command "come" preceding it but includes a response from that portion of humanity that opposes God. "And the kings of the earth and the great men and the commanders and the rich and the strong and every slave and free man, hid themselves in the caves and among the rocks of the mountains; and they said to the mountains and to the rocks, 'Fall on us and hide us from the presence of Him who sits on the throne, and from the wrath of the Lamb; for the great day of their wrath has come; and who is able to stand’" (Rev. 6:15–17)? Robert Thomas says, "The verb ēlthen ("has come") is aorist indicative, referring to a previous arrival of the wrath, not something that is about to take place."[3] Clearly in the context "has come" refers back to the commands issued by the four living creatures in relation to the first four seal judgments. Even pre-wrath advocates admit that if the wrath of the Lamb refers to these first four seal judgments then there is wrath throughout the entire 70th week of Daniel rendering their theory of the timing of the rapture invalid. The flow of the context of Revelation 6 supports the notion that "has come" is the earthdweller’s response to all of the seal judgments.

Obviously, much more was covered during the debate than I have been able to report on in the limited space of this article.  There was a fair amount of interaction and back-and-forth between us that may be helpful to those who are attempting to understand these issues. If you are interested further in this issue then you can either watch or listen to the debate at the pre-trib website. If you do, I pray that you will be able to realize that the New Testament teaches the Church to always be waiting for Lord Jesus Christ and not the antichrist that other views admit will be the case since they are blind to our pretribulational hope. Maranatha!

[3] Robert L. Thomas, Revelation 1-7: An Exegetical Commentary (Chicago: Moody Publishers, 2002), p. 457. The New American Standard Bible translators rendered this verb as "has come," meaning they see it as a constative aorist and not an ingressive aorist "will come" as would be required for the pre-wrath view to be correct. Most of the newer translations render 6:17 with "has come" (NKJV, ESV, RSV, NIV, NEB, NET, Phillips, Moffatt, Weymouth).